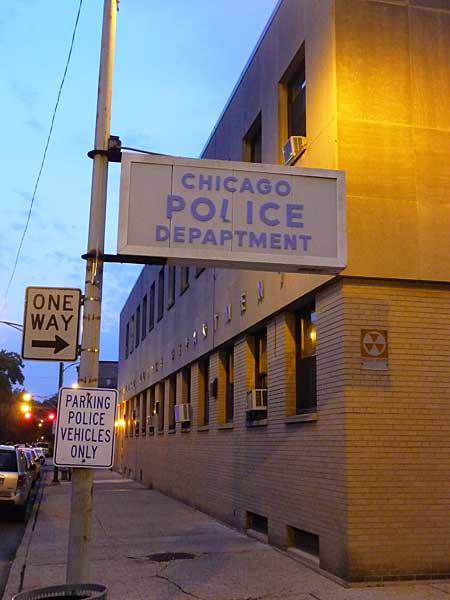 Mayor Rahm Emanual confirmed Monday that police stations may close in Chicago's efforts to cut costs and add beat cops. In the Chicago Sun-Times, City Hall reporter Fran Spielman singled out the Wood Street station as a target for closing.

It's not a new issue: In 1992, consulting firm Booz Allen Hamilton recommended that Mayor Richard M. Daley eliminate seven districts. Spielman's report this week noted that the 13th District station house, 937 N. Wood, is the only one in the seven districts that has not been rebuilt in the past decade.

The Wood Street station was built in 1960 and the station lockup has been out of use for at least four years.

Neighborhood volunteers faced these facts when introducing Ald. Proco Joe Moreno to 1st Ward issues in April 2010, and in discussions with his predecessor Manuel Flores in December 2009.

The East Village Association briefing paper for the new alderman is worth reviewing today to measure progress on community concerns. Here is EVA's statement on "Future Plans for Wood Street Police Station":


In recognition of the eventual relocation of 13th District Police operations from the Wood Street property, the EVA membership has expressed its desire to retain the property for community use. Wood Street is the main residential artery of East Village and has already established itself as a green corridor with three community gardens between Division and Augusta (Frankie Machine, Greenhouse Garden and the newly established Near North Montessori Farm). East Village's grassroots emphasis on gardening and parkway beautification (lead by Jeanne Felknor) and the growing interest in urban food production is making our neighborhood a green leader among urban communities. Using the Wood Street Police property to support additional community-focused activities is the next logical step.
Police Ward Liaison