Next round on Division/Ashland development 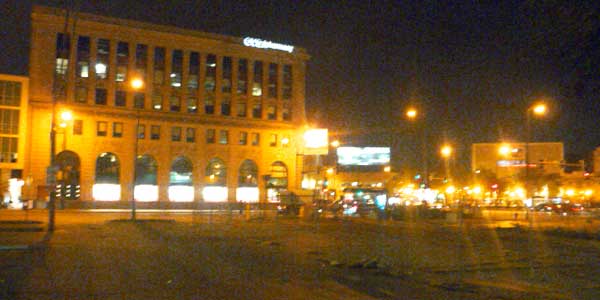 It's not a done deal. Developers return this month to Ald. Proco Joe Moreno with alternative plans for the former Pizza Hut site at the southwest corner of Division Street and Ashland Avenue.

Two plans are already on the table for 1601 N. Division. Robert Buono and Paul Utigard on Aug. 15 showed Moreno and East Village Association representatives drawings of a 40-foot glass and steel retail building for PNC Bank, half the height of the MB Financial Bank across Division, and a single-story version they said did not require zoning concessions.

Moreno pressed the developers to add affordable housing, and EVA sought a larger mixed-use building that that better addressed the busy Blue Line pedestrian traffic at the Polish Triangle. Buono said a bigger building presented more permission and construction hurdles. He claimed no bank would finance it, but conceded that he had not presented business plans for such a project.

Both sets of drawings indicated drive-through access in the back of the building. Eastbound-only traffic would turn down the alley shared with Wendy's and exit at Ashland.

Scott Rappe and Neal McKnight of the EVA planning committee will report on the discussions at Monday's membership meeting. It starts at 7 p.m. in the Happy Village, 1059 N. Wolcott.

Business and community comments shared with EVA overwhelmingly favor a larger, transit-oriented approach at the intersection: