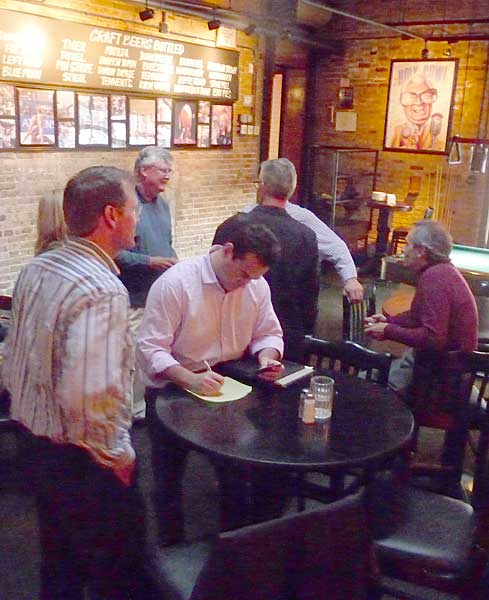 Sept. 19, 2011 board of directors minutes
Submitted by Stephen Rynkiewicz

Co-owner Rob Buono led the presentation to more than two dozen people at Leona's restaurant, 1936 W. Augusta. The 16,000-square-foot property consists of two parcels, the corner lot and a strip across the alley shared with Wendy's. Covenants will allow renters to use Wendy's parking lot but prohibit quick-service restaurant tenants.

The new plan calls for ground-level retail, second-story office space and five floors to hold 50 to 70 rental apartments. A bank has signed a letter of intent as anchor tenant.

Architect Jon Heinert of Wheeler Kearns Architects showed a site plan that locates the bank along Ashland Avenue, with two eastbound drive-through lanes and a sidewalk to the south. Two or three other tenants would front Division Street. Ten perpendicular parking spaces west of the alley and five to the east allow traffic berth on either side. 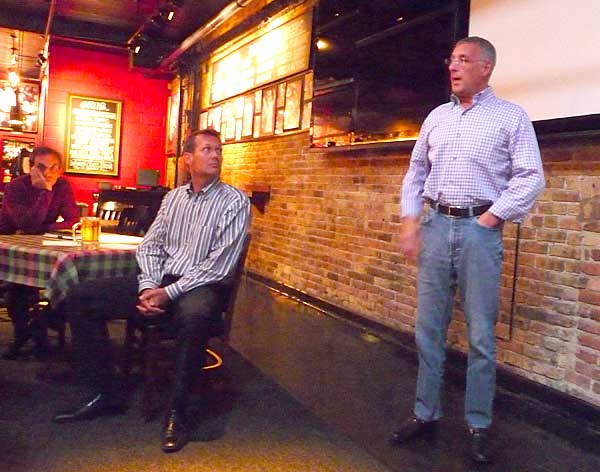 
Architect Jon Heinert of Wheeler Kearns Architects showed a site plan that places the bank along Ashland Avenue, with two eastbound drive-through lanes and a sidewalk to the south. Two or three other tenants would front Division Street. Ten perpendicular spaces west of the alley and five to the east allow parking berth on either side.

Second floor common space includes utilities, bicycle storage and exercise and art studios. The apartment floors each have 10 to 15 studio to two-bedroom units, and a green roof has a common deck facing Division and Ashland. There are no balconies. In perspective renderings, the poured-concrete building is roughly 80 feet, meeting the height of the office building across Division.

Planning co-chair Neal McKnight said that in meetings with Ald. Joe Proco Moreno he and Rappe had discussed a barrier on Division to restrict left turns to the bank, Wendy's and possibly Marshfield Avenue; drive-through traffic would turn south onto Ashland.

The property is zoned B3-2. Buono said it would need to be first rezoned B5 then established as a planned development to allow the parking exceptions. The plan does not add parking for the apartments, which Nagel and Rappe noted would be unique for a neighborhood development. McKnight said the Blue Line location justifies it. Buono added that the lack of parking would rule out a condo conversion.

Answering questions from the audience, Buono said the owners had grown confident enough in the rental market to propose the larger building. Chicago would require 10% of the units to meet affordability guidelines, and Buono said the building would be built without low-income tax credits. The owners are open to restrictions on types of retail such as pawnshops or smoke shops.

Directors Aaron Bilton, McKnight, Nagel, Rappe, Stephen Rynkiewicz and Tom Tomek continued to meet after the presentation, with Rich Anselmo also participating. Before turning to other agenda items, they agreed to request an additional briefing for the Oct. 3 EVA general meeting, although plans are too preliminary for a membership vote. The planning committee was directed to give Moreno written feedback and to seek a Division Street median extending west to Marshfield Avenue, where left turns already pose traffic issues.

• The board reviewed the general meeting with Pritzker School and agreed to publicize its Oct. 15 open house at 2009 W. Schiller St.

• Board members will continue to post yard signs the week before general meetings.

• Nagel will contact picnic attendees to invite them to the Oct. 3 meeting. Adam Burck of the Wicker Park Bucktown Chamber of Commerce is scheduled to speak, and Native Foods Cafe, 1484 N. Milwaukee, will present a business minute.

• Mark Duntemann will report on the volunteer tree census in November.

• Dana Palmer will continue to reach out to Chicago Grand Neighbor's Association to jointly obtain and place dog-waste bag dispensers.

• EVA will seek a meeting with Moreno to review planning issues covered in the briefing document EVA presented him in April 2010. The website will republish its statements on efforts to consolidate parcels at 1600-1620 W. Chicago Ave. and future plans for the police station at 937 N. Wood St.

• The contest to gather illegal advertising fliers will be repeated at the Oct. 3 meeting and publicized in the newsletter.

• To mitigate added delivery traffic, EVA will seek a larger loading zone for Roots Handmade Pizza at 1924 W. Chicago and reversal of traffic flow on the 800 block of North Winchester.