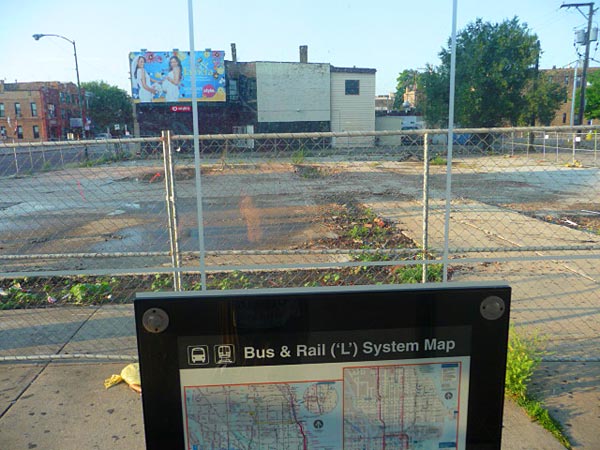 The East Village Association board of directors has released this statement on development of the former Pizza Hut property at 1601 W. Division. The statement takes the form of a letter to 1st Ward Ald. Proco Joe Moreno, who has asked EVA to review plans for a PNC Bank building at the site.

The East Village Association has considered Mr. Robert Buono and Mr. Paul Yutigard's proposed development scheme for 1601 W. Division. We have found it to be in opposition to our policies for the site and have therefore declined their request to present it to our general membership.

As you are aware, since 2007 the East Village Association has advocated that any development at 1601 West Division address the following four points:

1. Significant Presence - the building should approach the height, mass and quality of the landmark bank to the north, and with the bank, form an appropriate gateway to the vibrant communities to the west of the Polish Triangle.

2. Maximize Density - the building should maximize the current zoning potential of the lot, and ideally seek additional FAR [floor-area ratio], to fully exploit its proximity to multiple modes of public transit, and the densely populated surrounding community.

3. Mixed Use - the development should provide a mix of residential, retail and business tenants that serve the needs of the surrounding local population.

4. Pedestrian and Transit Oriented - the development should seek to attract customers on foot, bicycle and via mass transit traffic, rather than by automobile. Drive-thrus and other automobile-focused uses will increase traffic congestion and reduce pedestrian safety and comfort.

Representatives of the East Village Planning, Preservation & Development Committee have met with Mr. Buono and Mr. Yutigard on two occasions to discuss their proposed development in depth. The current scheme, which is two stories tall, fails to maximize the zoning potential of the lot, accommodates only commercial uses and incorporates a drive-thru banking facility. As such it is un-responsive to any of the concerns EVA has expressed regarding the site.

Under our development review protocols, EVA's president decides how such issues are handled. Upon receiving the PP&D Committee's report regarding the meetings with the developer, Mr. Nagel referred the question of how to proceed to the board of directors.

After discussing the proposed scheme at great length, the board of directors unanimously decided no further action was required on the matter. The reasons for this decision include:

1. The proposal does not meet any of the four established principals EVA has put forth for development on the site.

2. Mr. Buono did not follow through with his commitment to present a scheme without a drive-thru (a scheme he apparently shared with you). This creates a false choice between an unresponsive scheme and "nothing."

3. Despite our repeated inquiries as to what specifically we are being requested to approve, Mr. Buono insists that he can do what he is proposing as-of-right, and that nothing is needed from the community.

Our decision not to allow Mr. Buono and Mr. Yutigard to present their scheme is consistent with our handling of other unresponsive development schemes on this site, three of which we have seen and/or discussed in recent months; none of those were forwarded to the membership for consideration either. There is simply no reason to entertain proposals which are diametrically opposed to the vision that our organization and its membership have for this site.