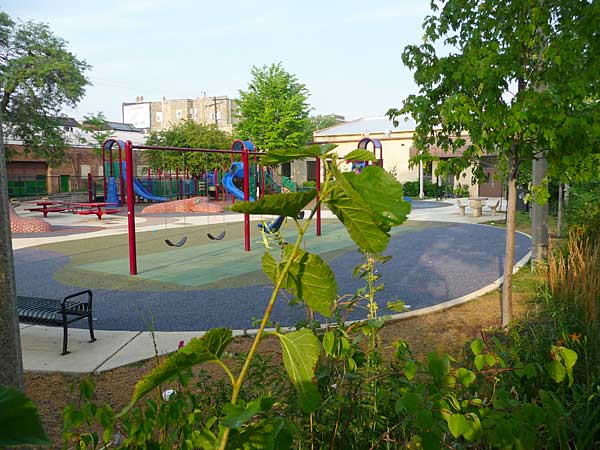 Annual BBQ follow-up
Picnic raised more than $350 for new East Village signs. KK Goh will e-mail Greg Nagel the attendance list and Nagel will email those who attended to invite them to attend an EVA meeting. Dana Palmer will send thank-you letters to all businesses who donated for the raffle: Wicker Park Fitness, Tres Biene Nail Salon, The Boundary, Greenheart, Moonshine, Black Dog and Super Dog Walking. A thank you also will be sent to the Commercial Park Advisory Council for allowing EVA to reserve the park for the occasion.

East Village signs
Tom Tomek researched quotes for pricing of the signs. The final quote was $2,436 for 80 signs with a 3 year guarantee. The brackets to hang the signs have been quoted as being about $700 at Menards. This brings the total for the signs to $3,200. Tomek will order the signs. Installation is still being worked out with the alderman's office.

Development of the former Pizza Hut site
A proposal was brought to Ald. Proco Joe Moreno after he was informed of the desires of the neighborhood in development of the property at 1601 W. Division St. According to Greg Nagel, Ald. Moreno reported that in the original plans no-drive through existed. However, the developers now convey a desire for a drive-through. Therefore, Ald. Moreno requested that the development plans be brought to the general membership of EVA for a vote. Greg Nagel as president declined general membership review because the did not meet the basic desires of the neighborhood.

According to Nagel, Ald. Moreno threatened not to recognize EVA in decisions about zoning in the neighborhood. Therefore, Nagel consulted with the board about his decision. The board decided that the proposal does not meet the desired concept for the site and therefore there is no need to bring it to a vote before the general membership. A meeting has been set for Aug. 15 with the alderman to hear out his reasons for wanting the general membership to review this proposal.

Scott Rappe gathered letters from various residents and businesses in the neighborhood opposing the current development plan with the drive-through. He also drafted a letter that was signed by all board members, opposing the development plan with a drive-through and declining the request to bring the proposal to a general membership vote. All these letters will be brought to the meeting with the alderman on the 15th. Neal McKnight will communicate directly with PNC Bank, the bank in the development proposal, that the neighborhood in not in favor of the site plan.

Dog-poo bag dispensers
Chicago Grand Neighbor's Association was planning to have a rummage sale to raise money for the purchase and EVA was asked to join them to obtain dispensers for both neighborhoods. Dana Palmer will continue to collaborate with CGNA and find out details about the dispensers, pricing and how many to order.

New business
Carol Mrowka presented an issue to the board with the property at 1026 N. Winchester. She stated that the property is vacant but with new owners. However, the yard is overgrown, bugs are present and a foul odor is coming from the property. Ideas were circulated about what could be done. Neal McKnight spoke of a statute that might help with this situation and agreed to e-mail the information to Mrowka. Greg Nagel and Scott Rappe agreed to contact 311 to make a report and obtain a service request number regarding the property's condition.