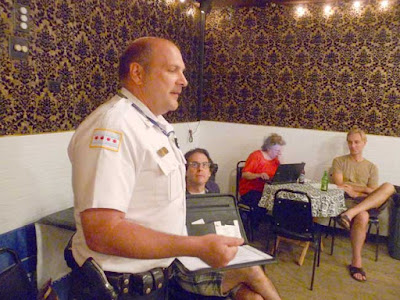 
13th District: On crime in the neighborhood 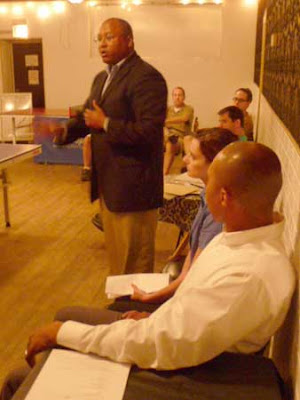 Walgreens promised responsibility for managing their own liquor license, but they have no control on neighboring stores.

Handbill contest postponed to July meeting for better promotion and awareness among residents.

Dog Poop: Did not cover

EVA Logo: Thomas Tomek reported that logos are complete, looking for quotes and sources of funding.

August Tree Project: Neal McKnight reported ongoing survey and pricing/value to be completed by arborist by next month (July). Ronda Locke looking for volunteers to to adopt a parkway in the neighborhood, those interested to follow up with McKnight.

Secretary Report: Did not cover

Website/Newsletter: Stephen Rynkiewicz asked on the effectiveness of OhSoWe site for EVA news, members responded on difficulty of use (requires logging in).

Neal McKnight mentioned Alderman Joe Moreno's request that for residents to identify buildings that are of historical significance for preservation but not necessarily under Landmark status. This was in response to demotion of 814-820 N Wood buildings, one of which was due to oversight.

Brooklyn Bowl project on Chicago Avenue may be cancelled due to prohibitive costs for soundproofing the ceilings.

CAPS Report
Thomas Tomek reported on recent arrest near Hermitage Avenue. Criminal was apparently responsible for several auto-related break-ins in the neighborhood, criminal activity should have since declined

New CPS budget approved for 2011-2012: All staff to be retained, new staff will be added to accommodate the consolidation of Andersen & LaSalle II and the pre-kindergarten program remains intact for 2011-2012.

End of School Fun Day is Thursday, June 9 at the Wolcott Avenue playground. Wolcott Avenue will be closed from 9am to 3pm for the Jesse White Tumblers.

McKnight reported that Chicago Performing Arts School will be moving in to Wells High and share facilities, approximately 150 students.