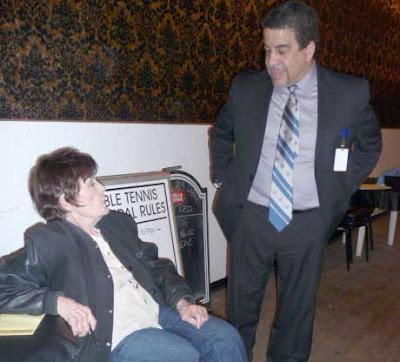 Rob Levitt, owner of The Butcher & Larder, spoke about his store, opened at 1026 N. Milwaukee two months ago. It is open every day of the week except Tuesdays. Levitt's focus is on working with small, local farms to obtain meat and use the whole animal with no waste.

Ernesto Matias has been principal of Wells Community Academy High School for three years now. He told some of the history of Wells and stated that there are now 582 students with a 60% graduation rate.

Matias described the three academies at Wells for logistics, law and teaching, and how he and his staff plan improvements. If awarded, a grant would give $2 million a year for three years to coach teachers. A swimming pool to open in June 2012 possibly would be open to the public before school hours.

The proposed Field of Hope would include a baseball field that would double as a soccer field, a small children's park, dog park and climbing wall with an outdoor movie screen on the opposite side.

EVA and the surrounding neighborhood could help Wells by mentoring, tutoring, being a guest speaker or motivational speaker, parent patrol and assisting with grant writing. Fundraising is another way the community and EVA could provide support, Matias said.

A motion was made by Stephen Rynkiewicz and seconded by Neal McKnight to make a change to the bylaws regarding who is eligible to vote. The motion was to delete preamble of Article IV; delete last two sentences of Article IV Section 2 of the bylaws; Amend first sentence of Article IV to read: “Only members in good standing over 16 years of age who reside or own property in the area defined in Article II and who have been members for a minimum of three months are eligible to vote. Add at end of section: “No person may cast more than one vote.” Motion was passed with only one vote in opposition.

The tree census is set for April 30.

KK Goh as new EVA treasurer stated that current funds are just over $3,000.

Aaron Bilton reported that Andersen school is closing early and existing students will be given an opportunity to enroll at LaSalle II.

The West Township Board of Review will close May 17. Aaron Bilton will bring forms to appeal property taxes at the next membership meeting.