Gardens, trees, taxes at May 2 meeting 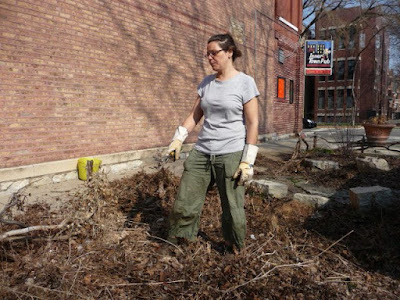 Board meeting minutes for April 11, 2011 submitted by Dana Palmer

East Village signs
Paula and Tom Tomek presented their draft designs for signs to indicate the East Village neighborhood. Those present expressed opinions on designs and what the signs should include.

Roots Handmade Pizza
Scott Rappe reported on his meeting with Ald. Proco Joe Moreno regarding the Roots project at 1924 W. Chicago Ave. The concessions put in writing are to close the pickup window by 8 p.m. or dusk. Rappe said he put in a suggestion to just say 8 p.m. Another concession was that delivery cars will be marked and will not use the pickup window, and that valet will be on Chicago not Winchester. Rappe will try to get the alderman to sign the final written concessions so that they will hold more weight should issues arise.

Polish Triangle
Governor's Pawn Shop (former gubernatorial candidate Scott Lee Cohen proprietor) has been proposed at 1227 N. Milwaukee on the Polish Triangle, and the Wicker Park Bucktown Chamber of Commerce has asked for EVA's opinion on zoning. The EVA board was not in favor of a change from B3 to B1 and a zoning special use.

A CVS Pharmacy request to sell liquor at 1200 N. Ashland Ave. would require the city to lift the liquor moratorium for a two-block area. EVA board voted against lifting the moratorium.

Ald. Moreno expressed frustration about EVA's failure to approve bank development proposals for the former Pizza Hut site at 1601 W. Division. According to Neal McKnight, the alderman's office receives calls frequently about making that site more appealing as well as frustration as to why development has been turned away.

The EVA board believes this site should preserve the pedestrian designation of Division Street. McKnight will speak with the bank owning the Pizza Hut property about possible solutions. Greg Nagel will speak with Yum Brands about altering its covenant against food being sold on that site so that a greater array of development can be considered.

May membership meeting
Guest speakers May 2 are arborist Mark Duntemann regarding the April 30 tree census and Jeanne Felknor of the East Village Garden Club on gardening. McKnight will send a reminder to both guest speakers about presenting. Aaron Bilton also will bring forms for appealing property taxes.

Damen & Augusta Food
Owner Eddie Radwan came to the board meeting along with two neighbors with Krain Corp. realty asking for the liquor moratorium to be lifted so that Radwan can sell liquor at 1001 N. Damen Ave. He expressed this as his way to compete with the gas station across the street.

Radwan also presented a new concept to sell fresh fruits and vegetables and add a deli counter. The board voted against lifting the moratorium but Greg Nagel will encourage the owner to go forward with the fresh food and deli counter.

Wells Community Academy
Stephen Rynkiewicz agreed to write an article for the newsletter about Wells High School at 936 N. Ashland Ave. and how people in the neighborhood can help out. Greg Nagel will reach out to Wells and offer raffle assistance for fund-raising events. He will also ask if students would like to participate in the tree survey April 30.

Dog waste
Dana Palmer will e-mail the alderman's office regarding obtaining receptacles for bags that can be placed throughout the neighborhood to help reduce waste.

Trees on Augusta
McKnight will reach out to Ronda Locke for students to participate in the tree survey. He will also get the time and location to meet April 30 from Mark Duntemann. Rappe will inquire about possibility for T-shirts. Rynkeiwicz will send an email blast about the survey.

Landmark aigns
Rappe will call in June to check on status for our neighborhood.