East Village residency at issue (it's not about Rahm) 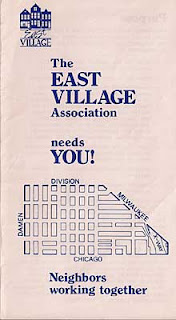 As Rahm Emanuel sorted out his Chicago residency bona fides early this year, East Village Association leaders started to weigh what makes someone part of the neighborhood. If members agree in April, EVA voters must be East Village residents or property owners.

They won't need to pull a wedding dress from their crawlspace as proof. The idea is that while anyone can support East Village, only those directly affected should cast ballots on community issues.

Residency comes up often in connection with EVA votes because it has not been a requirement. Anyone who identifies with the neighborhood may (and should) join — I signed up as an Oak Parker searching the real-estate listings. But I couldn't vote immediately, because a monthlong cooling-off period was in place to discourage single-issue voters.

Often newcomers arrive with development interests before the group. Votes for such things as zoning changes and special land uses are intended to advise the alderman on neighborhood sentiment, and their authority would be tarnished by participants still unfamiliar with the surroundings.

EVA took another look at the rules when people who had not yet been added to the member spreadsheet showed up Jan. 3 ready to vote on a Chicago Avenue rooftop cafe for Bleeding Heart Bakery, briefly delaying an announcement of the tally.

The board reviewed member Aaron Bilton's proposal on Feb. 15 and circulated amendments over the next three days. The change would limit voting privileges to residents and property owners who have been members at least three months, a span chosen both to make election rolls easier to compile and to assure that voters will have settled into their new territory.

Also at issue were members with the potential of voting twice, either those who belonged to two neighborhood groups debating the same issue or those holding both family and business memberships. And since a strict reading of the bylaws would have required everyone voting Jan. 3 to have paid both 2010 and 2011 dues, the proposal gives the board discretion in dues collection dates.

EVA members will vote the proposal up or down April 4 in the monthly meeting at Happy Village, 1059 N. Wolcott:

Be it resolved that the By-laws of the East Village Association be amended as follows: Delete preamble of Article IV; delete last two sentences of Article IV Section 2; amend first sentence of Article VI to read: "Only members in good standing over 16 years of age who reside or own property in the area defined in Article II and who have been members for a minimum of three months are eligible to vote. Add at end of section: "No person may cast more than one vote."
About EVA Bylaws Stephen Rynkiewicz