Board meeting minutes for March 14, 2011 submitted by Dana Palmer

KK Goh and Nicole Semple will meet this week to make transition of treasurer.

Neal McKnight reported that the tree census is planned for April 30 and he will write an article for the newsletter to inform the neighborhood. He also reported that he will be working with Ronda Locke to round up kids from Noble Street charter school to help with the census to earn community service hours.

It was also mentioned that the students from the Near North Montessori school are also interested in earning community service hours. The article will be emailed to school boards and the alderman to let everyone know what is happening and to see if any others are interested in participating.

April: Nicole Semple to ask Butcher & Larder, Rich Anselmo has Sublime for business minute. The principal of Wells High School is scheduled to be guest speaker.

May: Neal McKnight will ask Mark Duntemann to report on tree census and Jeanne Felknor to present on gardening.

During the April meeting the group will vote to have a more strict boundary system for voting privileges and a longer waiting period to vote after joining.

Tom Tomek is currently working on designing new logo for EVA signs. Scott Rappe reported that Heidi Sperry at the city Historic Preservation Division said to call in June about landmark signs; he said he would call. Tom and Stephen Rynkiewicz will also work together to come up with a new logo for the website.

1st Ward Ald. Joe Moreno and chief of staff Raymond Valadez joined the meeting to discuss Roots' request for a zoning change. Moreno stated that he could not stop a pizza pickup window but advocated withholding an outdoor cafe license unless certain concessions that pleased the neighborhood were made in writing.

Greg Nagel voiced concern about enforcing concessions and the alderman suggested possible consequences if they are not followed. The EVA board will continue to work with Moreno regarding concessions important to the neighborhood. 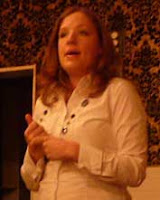 Greg Nagel and Aaron Bilton made a presentation about how property taxes are assessed and why, and the process of making an appeal.

Stephen Rynkiewicz stated that the newsletter will be posted on OhSoWe, a website in development that will allow those who join to share information and post comments.

Tom Tomek presented on the month's CAPS meeting and what reports had been made in the area.