• Schools: EVA is interested in having a greater involvement with the neighborhood schools and have invited the Wells High School principal to be the guest speaker at the membership meeting in April.

• Voting for bylaw change: The EVA board is currently working on a solution to eliminate or lessen any abuse to the bylaws regarding voting and membership.

• Elections: Elections for the board will be held at the membership meeting in March. An e-mail blast has gone out asking for interested parties. So far, Neal McKnight has agreed to run for vice president, Dana Palmer for secretary, K.K. Goh for treasurer and Greg Nagel for president.

• Business Minute: Scott Rappe will ask Nicole Semple to invite Ron Leavitt, owner of The Butcher & Larder, to come to the March membership meeting to do the business minute. Rich Anselmo will ask a new hair salon in the neighborhood to come for the business minute in April. 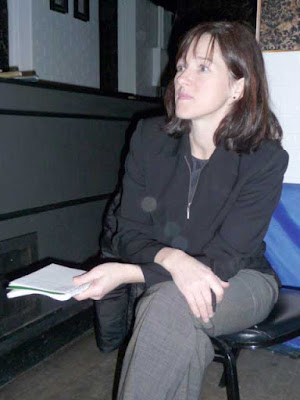 • Snow clean up: According to Locke, the alderman is looking into hiring an outside firm to haul snow away due to lack of space for the snow to be placed. She also mentioned that the city does not do alleys. Property owners are responsible for shoveling snow on sidewalks in front of their property.

• Parkway: Parkways are city property. If someone wants to put a structure on the parkway in front of their home, they would need a public right of way permit to do so. However, if the city needs to do work in that parkway, they can do so and are not responsible to damages done to the structure.

• Garbage cans: If there are disputes in regards to where they are being placed, the alderman's office can be called. If there are holes, or if cans need to be removed or replaced, call 311. Also, large items such as couches that are wanting to be discarded can be put in the alley with trash.

• Rats: The city will bait on private property if the property owner will allow it. Holes in garbage cans can be a reason why there is more rat presence, so having them replaced is beneficial.

• New Business: Locke mentioned that the Commercial Club Park is having a big Earth Day celebration. She also mentioned an interest of some neighbors in the EVA signs and having them redesigned.

• Landmark Signs: A neighbor also brought up the fact that East Village still does not have landmark signs for its landmark district.

• Late Liquor License Request: Shambles on Division has requested a late liquor license that would allow them to stay open and sell liquor until 4 a.m.

It has been suggested to have a one-time a year renewal of EVA membership versus a random renew process to help lesson the burden of keeping track of membership dues.

Stephen Rynkiewicz mentioned that EVA is in a beta test program for the Oh So We website. Members would be able to send email blasts to the whole group, they could post flyers and even post items or services that could be shared.

Scott Rappe stated that a development agency will be coming to the next board meeting to present a proposal for the former Pizza Hut site. Buon Gusto will propose a grocery store on Ashland just north of Chicago with a license to sell wine. Scott will find out what moratorium is in place there.

Tom Tomek reported that there was no meeting in January and February was canceled due to snow. However, there has been an increase in reported graffiti in the area.

Tomek and Locke spoke about LaSalle School and not meeting the requirement of enrolling neighborhood residents. The commitment was to have 50% of all newly enrolled students to be within 1.5 miles of the school. Greg Nagel has agreed to put an article in the newsletter about the issue.
1611 Division Minutes Ward Liaison