Another slice at Pizza Hut site 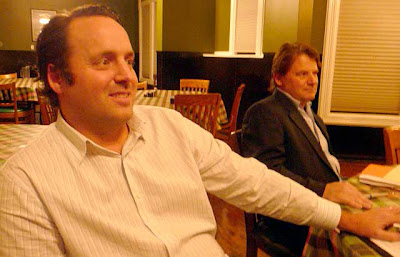 Minutes of Feb. 15 board meeting submitted by Stephen Rynkiewicz

The former Pizza Hut building at 1601 W. Division is in receivership with Wintrust bank, said Bob Brownson of Oxford Development Partners. With Louis Schriber III of Shorewood Development Group, Brownson outlined a plan that would anchor a PNC Bank branch there in a new four-story apartment building.

Two drive-through lanes behind the building were a sticking point. "The drive-through is a deal-breaker," Schriber said. However, McKnight noted that the board last year rejected a similar proposal.

That position is harder to maintain in the face of a real estate recession. "For at least four or five years it will be hard to do anything on this site other than what we have elaborated," Brownson said.

Board members would discuss the proposal further, McKnight said.

Planning co-chair Scott Rappe suggested envisioning some alternate interim uses for the property that would serve the interests of the community, while waiting out the current economic downturn. These might include park land, a community garden, or a place for farmer's markets and local craft fairs.

There was no presentation on the proposal for Buon Gusto deli at 845 N. Ashland.

The board slated Kok Keng Goh to run as treasurer, replacing Nicole Semple. Greg Nagel, McKnight and Dana Palmer will stand for re-election as president, vice president and secretary. Nominations also will be taken from the floor at 7 p.m. at Happy Village.

Nagel joined the meeting. Rappe said 1st Ward chief of staff Raymond Valadez confirmed that Bleeding Heart Bakery Cafe would require a zoning change at 1916 W. Chicago Ave. Zoning was not addressed at the Jan. 3 EVA vote consenting to a rooftop cafe, and a zoning change could outlast the special use.

Board members met with Moreno on Jan. 12 to discuss issues in the Roots pizza/Bleeding Heart bakery plan, yet a month later Valadez could confirm only that Moreno is in discussion with developers Scott Weiner and Greg Mohr. Combined with the March EVA election, the delay could push a vote into April.

The city landmarks commission will place signs to identify the East Village Landmark District. Rappe will investigate city plans and make a recommendation on replacement of the blue metal signs placed by EVA.