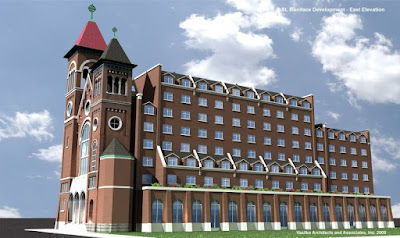 Despite 11 years of effort to preserve all of St. Boniface, the rectory will be demolished by the end of the month.

The church at 921 N. Noble St. is being converted into senior housing by Institutional Property Management through a convoluted scheme structured by several city departments and agencies. Among other things, the redevelopment agreement required money to be set aside in two escrow accounts, one for the demolition of the rectory, the other for the demolition of the church.

If the developer found no use for the rectory, the agreement required a demolition permit be issued by Dec. 31, and demolition to be completed by Jan. 30. A market study was commissioned by IPM to determine how many living units the current market would support.

It was hoped that the review would show economic conditions would support more than the 75 units needed to make the project feasible. Unfortunately this was not the case. Efforts were made to preserve the portion of the rectory fronting on Noble, but due to the financing arrangement, no money was available to cover the increased costs of saving the facade.

As reported here, the East Village Association voted to support Bleeding Heart’s request for a zoning special use for a roof deck. We continue to believe that the property (1916 W. Chicago Ave.) also requires a zoning change to convert the north third of the lot from RT-4 to B3-2. However, the owners of the property declined our offer to vote on this issue.

Members of the Board met with Ald. Proco Joe Moreno to discuss concerns regarding Roots (1924 W. Chicago Ave.).

The group specifically requested that the alderman do two things in exchange for his support for the business’s incidental liquor license and sidewalk cafe permit: eliminate the proposed pick-up window and include conditions on the liquor license to restrict the size, location and operating hours of the cafe and adjacent bar windows.

Ald. Moreno committed to meeting with Roots and promised that EVA would be "very satisfied" with the outcome.
Planning Roots/Bleeding Heart St. Boniface