All over but the starting: a Bleeding Heart recipe 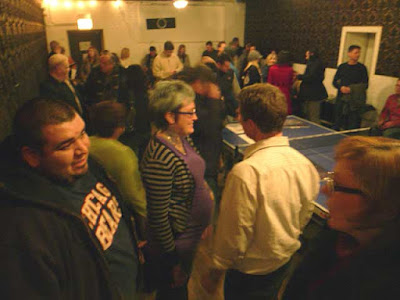 Some East Village Association members were disappointed after the Jan. 3 vote on Bleeding Heart Bakery Cafe. Most were thrilled. Regardless of which side you fall on, the vote holds important lessons on civic engagement.

To those who supported the cafe's proposed rooftop deck: Don’t take your victory for granted. Whether it was a friend's encouragement or a passion for Quad Cities pizza and organic baked goods, you felt the issue was important enough to come out, let your opinion be known and maybe join EVA and vote. Next month’s meeting probably will lack the fireworks, but your attendance in no less important.

To those of you who opposed the roof deck: Let this defeat be a wake-up call. Having a positive influence on your community will take more than showing up to a meeting and voting against something. Your opposition probably stemmed from bad experiences with other liquor-serving businesses in the neighborhood. You must attend meetings regularly, listen to your neighbors and share your own experiences early, before opinions are set.

Community groups require the commitment of volunteers to run the organization and more importantly, the dedication of residents to attend meetings regularly. This means not only participating when the issue is in your front yard, but also listening when it's on the other side of the community.

Active participation in a community organization can lead to a better, more nuanced understanding of the issues we face. It can also lead to a more unified community that is in a stronger position to influence the businesses in and around it. Rather than voting reflexively based on their own opinions, active members take into account how something might impact their neighbors. And when an issue affects them directly, they can be confident that their neighbors will do the same.

In my 21 years in East Village, I have seen EVA’s focus shift from gangs to trash to overdevelopment to demolitions, and now to livability and demographic shifts. I think many longtime members would agree that one of the most valuable aspects of consistent participation in EVA is the perspective you gain on these issues, and the moderating influence that your neighbors have on your own opinions.

Where you stood on the Bleeding Heart vote is not important. It is next month’s meeting, not the last, that will have the greater impact on the future of East Village. Nothing of consequence will be voted on, but attendance will reflect our interest in learning about each other and pulling together to act as a community.
Roots/Bleeding Heart