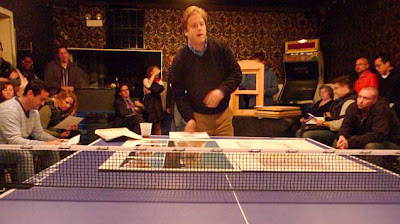 A 16-lane bowling alley, restaurant and performance space at 1850 W. Chicago got the unanimous support of East Village Association members in a Nov. 1 vote.

Chicago Bowl developer Peter Shapiro took questions from the 50 people attending in the ping-pong room at Happy Village, 1059 N. Wolcott. If 1st Ward Ald. Joe Moreno sponsors a Public Place of Amusement license, the venue at Chicago and Wolcott could open in early 2012.

Shapiro will make another presentation at 6:30 p.m. Wednesday in the Commercial Club Park fieldhouse at 1845 W. Rice St., which shares an alley with the Chicago Bowl site. Shapiro suggested his business would support park improvements.

The former Chicagoan plans a renovation of the 23,000-square-foot AAA Distributing Co. auto warehouse along the same lines as his Brooklyn Bowl, a former factory in the gentrifying Williamsburg district of the New York borough. Shapiro came armed with a written testimonial from borough president Marty Markowitz.

The restaurant would be the first Blue Ribbon Restaurants location outside New York. Chicago favorites likely would join fried-chicken platters on the menu, with Midwestern beers on tap. Screens would project rock, folk and blues performances alongside the bowling lanes.

EVA planning co-chair Scott Rappe recommended that EVA not oppose the plan after noting concerns over the facade's lack of visual interest and access to a 29-space parking lot, which would adjoin Tecalitlan restaurant and raze the building between them at 1834 W. Chicago. The lot would be double-parked at peak hours and take deliveries during the day.

The business would employ upwards of 100 people including security. Hiring staff within walking distance would be a "priority," Shapiro said.
Business Luxe On Chicago Stephen Rynkiewicz