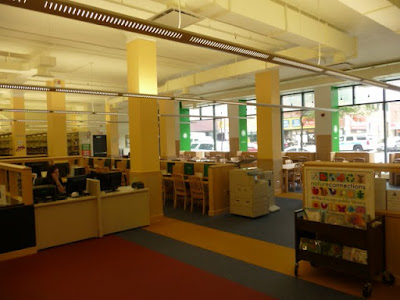 An overflow crowd of dignitaries and library supporters attended a Sept. 11 ribbon-cutting ceremony for the newest Chicago Public Library facility.

The West Town branch opened on Sept. 7, and the following Saturday marked the dedication of this long-anticipated community resource.

The 13,300-square-foot facility is located on the first floor of the historic Goldblatt’s Building at 1625 W. Chicago. It replaces two smaller storefront branches to the east and west on Chicago Avenue. 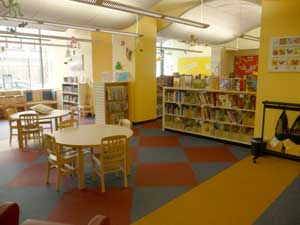 The Goldblatt’s building was scheduled for demolition in 1997, when the chamber of commerce and some Chicago Avenue businesses were supporting a plan to sell the land to Delray Farms, a produce market that has since closed its Chicago stores.

The Goldblatt's building was renovated and designed with the environment in mind, and LEED certification (Leadership in Energy and Environmental Design) is being sought from the U.S. Green Buildings Council.

Special guests included members of the Goldblatt family, who were on hand to see this reincarnation of the family store. They each received a piece of the original white marble floor, uncovered during the renovation. This marble was also reused in the entryway of the library, one of the many “green” features of the building.
Landmarks Library