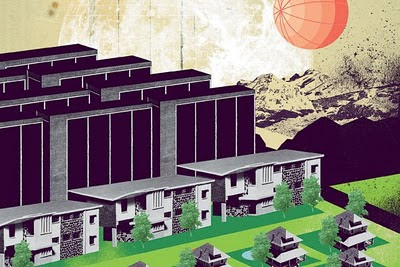 The average West Town condo price is $346,564, according to the October 2010 issue of Chicago magazine, with 985 sold in the first half of this year and the second half of 2009. The ranking is compiled from multiple-listings reports.

Single-family homes in West Town are comparatively rare, with log more single-family sales, including the Near North Side (averaging $2.3 million), Lake View ($1 million) and North Center ($766,949).

West Town prices fell 6 percent short of last year for condos and 11 percent for houses. Property values are holding steadier than in all adjoining areas but Lincoln Park, which is down by less than 3 percent for both condos ($442,510) and houses ($1.7 million).

The Tribune figures are based on 353 property transfer filings from May through July. The price is a median, with half the sales for more and half for less.

An Oct. 23 Tribune real-estate feature on West Town cited three recent sales south of Chicago Avenue at $189,500, $440,000 and $488,000, and a higher-end property north of North Avenue at $915,000. The article focuses on local points of interest, including Commercial Park and businesses in the West Town Chamber of Commerce.
Business Stephen Rynkiewicz