The long and short of Division Street plans 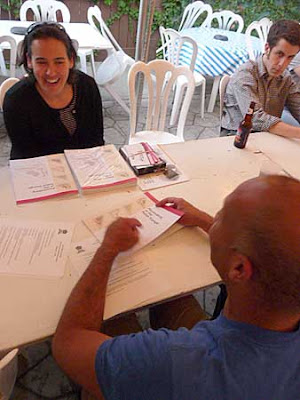 Meeting commenced at 7:10 p.m. with Business Minute presented by Wayne Janik of Janik's Cafe. The cafe at 2011 W. Division is open 7 days a week from 8 a.m.-4 p.m. serving breakfast and lunch. Breakfast is served all day. Alcohol is available as well as delivery options, catering and online ordering.

Several micro-level plans already are taking place: volunteer cleaning crews, lights on the trees for the holiday season, public events such as a bike-light handout and a Halloween parade. Some ideas at the mezzo and macro level involve landscape improvements, vendor carts, public art and improving the appearance of the train stations.

Now that there is a tangible plan in place, Mayer said, when money is available WPB will be able to act quickly to put the plans in action.

Aaron Bilton announced that the Chicago Public Library's West Town branch is now open and has a grand opening scheduled for Sept. 11, 2010, and the Commercial Park Advisory Council is hosting a wine tasting from 7-9 Sept. 16 as a fund-raiser.

Trees on Augusta: Neal McKnight is in the process of setting a date with arborist Mark Duntemann to do a tree census of the East Village neighborhood.

Greg Nagel announced development news with a condo project at 1624 W. Division, sale of the old Mas restaurant building at 1670 W Division, and work being done for a possible restaurant. The old AAA Distributing Co. building at 1830 W. Chicago is desired as a potential bowling alley, and St. Mary of Nazareth Hospital Center is interested in doing more community development.

Paul Haase announced that he and his wife are raising funds for the re-election of Ald. Joe Moreno with an event on Oct. 21.

Andrew Kinaci raised an issue with the group about dog waste nuisance. He agreed to write an article about the effects of not cleaning up after your dogs. The group brainstormed possible solutions such as posting signs about waste attracting rats as well as signs just reminding people to pick up the waste. Other suggestions were made such as having bag dispensers and more garbage cans in the area. This issue was agreed to be further discussed at the board meeting.

An issue was also raised about new parking meters placed on Augusta from Winchester to Wolcott. The complaint was that this is primarily a residential area and that the meters are being unused during the day due to enough parking already existing on Augusta. This issue was agreed to be further discussed at the Board meeting.