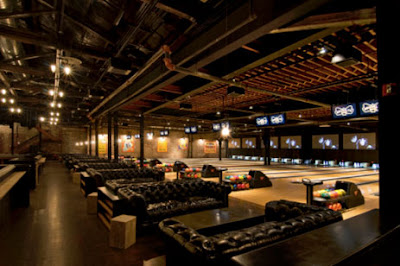 Shapiro plans to tear down the red brick building to the side of the main property for on-site parking, and is working with Alcala's for additional parking at night. Shapiro is planning LEED certification for the main building, adding a second roof as a sound barrier.

Questions were raised by the group about curb cuts and the appeal of this to the neighborhood. Shapiro went on to explain that he does not plan any sidewalk use, is opting for an incidental liquor license that allows service until 2 a.m. weekdays and 3 a.m. weekends.

Chicago Bowl would employ about 100 new employees from the neighborhood and surrounding area, and serve only local beers. Hours of operation would be 6 p.m. until 2 a.m. on weekdays and 12 p.m. until 3 a.m. on weekends. The facility would be 21 and older after 6 p.m. and would have a door fee and no arcade or pool, in order to deter a younger crowd in the evenings. Shapiro stated that he needs a Public Place of Amusement license for the bowling alley and asks the group to support the license.

The board discussed ways of having a food or coffee vendor placed in the Triangle to improve the area. Scott Rappe will discuss this request with Ald. Joe Moreno.

This issue was raised by resident Andre Kinaci at the last membership meeting. Ideas on how to alleviate dog nuisance were raised, such as posting signs from the Streets and Sanitation department, making signs to place in parkways and having waste bag dispensers throughout the neighborhood.

Scott Rappe agreed to speak with the alderman about obtaining waste bag dispensers. Dana Palmer agreed to make signs to post throughout the neighborhood and Greg Nagel agreed to a $50 budget for the signs.

Arguments were made that meters placed on Augusta from Winchester to Wolcott are unnecessary, and is reducing available parking on the Wolcott block where there is no zoned parking or permit parking. Scott Rappe agreed to discuss this issue with the alderman.

Greg Nagel reported that he obtained $200 in Dominick's gift cards.

Daniel Sirko with Birchwood Kitchen, 2211 W. North Ave., has agreed to do the business minute. Nicole Aquino with Lasalle II has agreed to be the guest speaker. Greg Nagel will be absent for this meeting and Neal McKnight has agreed to lead.

Greg Nagel stated that he would e-mail Dan Nehm about being a guest speaker regarding energy-efficient windows. Rich Anselmo agreed to contact Bend yoga studio about possibly doing the business minute.

Greg Nagel received an e-mail from treasurer Nicole Semple. She was able to fill out paperwork for a forwarding address; all funds were deposited in the bank and the new address was given to the bank.