Alderman Moreno begins with a promise 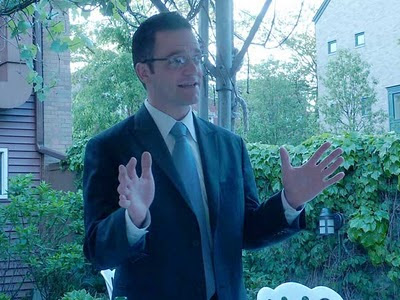 Proco "Joe" Moreno III began his appointment as 1st Ward alderman with a commitment to the East Village Association.

"I think our agendas are going to align very well," Moreno told about 40 EVA members gathered May 3 at the Happy Village's beer garden. "Any project that applies to zoning, I'm going to the [EVA] zoning committee and I'm going to take their recommendations very seriously."

Moreno said he quit his job last month as sales manager for union printer Buhl Press to take Mayor Daley's appointment as 1st Ward alderman. "Alderman isn't a full-time job, it's an overtime job," Moreno said. By way of introduction, he suggested that volunteerism is in his blood — his parents volunteered at a Catholic Worker house. Moreno studied at Augustana College and DePaul University, both affiliated with religious institutions, and his 14 years living in the ward included service on the Jose De Diego local school council and Humboldt Park Social Services board.

A volunteer graffiti-removal team is one of his first projects, using materials purchased through early campaign fund-raising. His Saturdays have included trips to inspect foreclosed homes with the ward superintendent and open hours throughout the ward (one came the following weekend at the Dominick's grocery at 2021 W. Chicago).

Answering a question from member Marjorie Isaacson, Moreno said he would consider ways to give 1st Ward residents a more direct vote on projects, such as a participatory budgeting ballot that Ald. Joe Moore of the lakefront 49th Ward sponsored last month. Moreno hedged his endorsement, noting the format would have to account for the ward's diversity.

On crime, Moreno suggested a phone tree as a tool to spread neighborhood alerts.

On schools, he suggested La Salle II magnet school may be falling short of a commitment to draw half its pupils from within 1½ miles and that he would use mapping software to audit enrollment. EVA has proposed the radius be drawn to within ¾ mile.

Moreno also suggested high schools were not improving as fast as elementary schools and that parents wanted more proactive moves to improve the learning climate. "A lot of [young] people are not interested in education when they walk in those doors, let's be frank," Moreno said.

City services such as street sweeping could be handled more efficiently if crews were not limited by ward boundaries, Moreno proposed. He suggested that crews could accelerate garbage hauling during the week to add recycling pickup on Fridays, and stated that city administrators had not "formally or informally" proposed a privately run water department.

Finally, Moreno suggested that the ward would propose using city discretionary funds next year for "green alley" improvements such as permeable surfaces or catch basins, and that budgeted money was still available for tree planting. Homeowners who want a tree on their parkway should make the request by calling 311.
Meetings Recycling Stephen Rynkiewicz Ward Liaison