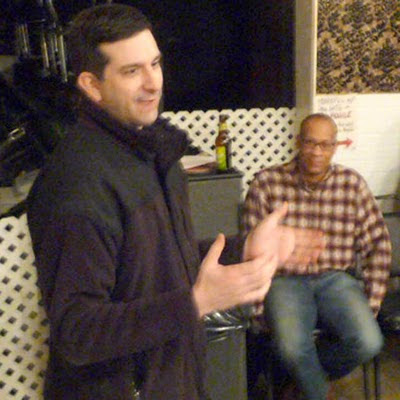 Ald. Scott Waguespack meets with 32nd Ward residents at the East Village Association meeting in the Happy Village, 1059 N. Wolcott.
With the alderman's seat vacant in his neighboring ward, Ald. Scott Waguespack was asked if he was willing to mentor the next 1st Ward alderman. Waguespack didn't rule it out. But as a frequent critic of Mayor Daley, he suggested it was unlikely he'd be asked for advice on a City Council in which 19 of 50 members will be Daley appointees.

The 32nd Ward alderman voted in December against the 2010 city budget, which filled a $500 million deficit largely with proceeds from the $1.15 billion lease of city parking meters. Elected in 2008, he quickly got a chance to deliver on his reform agenda when he voted against the 75-year meter deal. Waguespack observed that a report last year from the city inspector general later confirmed his analysis.

"You sold a city asset for $1 billion less than it was worth," Waguespack told the EVA group. "You essentially took it to the pawnbroker."
Meetings Minutes Recycling Stephen Rynkiewicz Ward Liaison