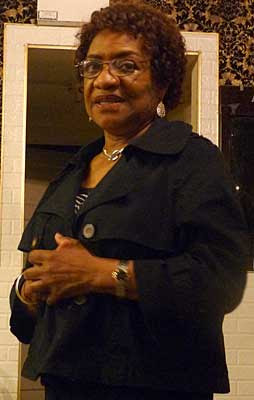 The 1st District representative voted "present" to rescind the increase and return the tax to 0.75%, a move that did not survive President Todd Stroger's veto. "I don't have any problem voting present when both sides are wrong," said Collins.

At 10.25%, the sales tax paid in Chicago is one of the nation's highest. Collins said federal stimulus money for Cook County Hospital justified no more than a rollback to 10%. Raising property taxes would have been the only alternative. she said.

County spending is boxed in by longstanding from state health-care mandates to the Shakman court decrees against political hiring, she said. "They have a structural deficit they ignored for years," Collins said.

Courts should relieve the county of its spending requirements and force more equitable state funding, said Collins. She nominally controls courts as chair of the County Board's Criminal Justice committee. She also leads the panel on Workforce, Job Development & Training Opportunities, and complained that trainees were required to be paid twice the minimum wage despite their lack of experience.

For more of Collins' comments, read minutes of the meeting.
Meetings Stephen Rynkiewicz