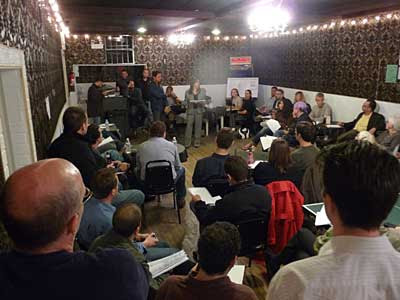 50 neighbors crowded the Happy Village bar for a presentation on plans for the Winchester restaurant, 1924 W. Chicago.

1924/1916 West Chicago Avenue
After a presentation by the landlord and tenant of the proposed Winchester restaurant at the last monthly meeting, a motion was made to not oppose the requested zoning change from RT-4 to B3-2 for the 1924 portion of the property. The motion passed by a vote of 17 to 9, subject to a number of contingencies regarding the construction and operation of the restaurant:


A second motion was made to oppose the requested zoning change from RT-4 to B3-2 for the 1916 portion of the property; this motion passed by a vote of 19 to 8. A letter was sent to Alderman Flores summarizing the results of the votes.

St. Boniface Church & Rectory
Although a demolition permit has been issued, until recently the Archdiocese of Chicago and the City of Chicago had been negotiating a possible land swap.

The concept was to exchange the St. Boniface property for city-owned land that the archdiocese could use. This would facilitate a private developer’s plans to restore of the church and build elderly housing on the site. Unfortunately this scheme is looking less feasible for reasons having to do with the legality of such land transfers.

The latest word is that the archdiocese is once again proposing that it retain ownership of the land, allowing the building to be utilized under a long term (99 years) lease.


Sidewalk Café Permit Review
The EVA board recently discussed the idea of requesting the aldermen for an advisory role in the approval of annual sidewalk café permits. The recent negotiations with the Winchester restaurant clearly demonstrated the frustration of many East Villagers with nearby bars and restaurants.

While the give and take between residents and businesses can be fruitful, it is difficult to ensure that commitments are lived up to once the zoning change and liquor license are granted. The profitability of these businesses is directly tied to the number of tables they have and how quickly they turn; a sidewalk café increases the effective size of the restaurant during their busiest time season and directly impacts this profitability.

Having the ability to weigh in annually on the granting of these lucrative permits might encourage business owners to be more sensitive to the concerns of surrounding residents.
Business Landmarks Meetings Minutes Planning Roots/Bleeding Heart St. Boniface Ward Liaison