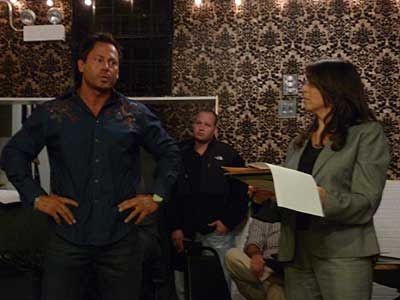 Guest speaker Bill Loumbardias, along with attorney Lisa Moreno, presented a proposal for The Winchester restaurant located at 1924 W. Chicago.

Mr. Loumbardias and Mrs. Moreno provided a revised proposal regarding neighborhood concerns raised at the previous March 2009 membership meeting. Among the concerns were noise, parking, garbage removal and storage, ventilation and the seeking of a Public Place of Amusement license:

After much debate, Scott Rappe, committee chair for Planning, Preservation and Development with EVA, made a motion to not oppose the zoning change from B3-2 to RT-4 of the property at 1924 W. Chicago with commitments of:


Motion seconded by Brodi Cole and passed by majority vote by EVA members.

Second motion by Scott Rappe was made regarding property at 1916 W. Chicago to oppose zoning change. Motion seconded and passed by majority vote by EVA members.
Business Members Roots/Bleeding Heart