May 4 vote on Chicago Avenue restaurant 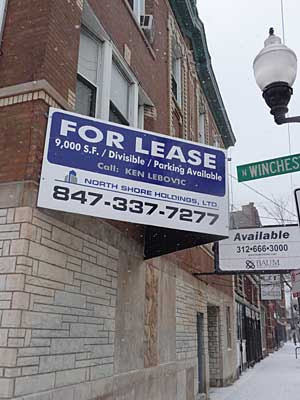 The East Village Association takes an advisory membership vote Monday, May 4, on a zoning change for 1916-24 W. Chicago Ave. The meeting starts at 7 p.m. in the Happy Village Tavern, 1059 N. Wolcott.

The proposed Winchester restaurant, to be located at 1924 W. Chicago Ave., has been previously presented to this community. We are pleased to advise that the West Town Chicago Chamber of Commerce and the East Village Neighbors have pledged support to this exciting project.

We pledge to use materials such as special rated drywall and special laminated
other materials designed for the soundproofing element to ensure that most noise will
be kept within the establishment. Furthermore, the Landlord is also requiring special insulation and sound proofing so that the residential occupants above the ground
floor will have quiet use and enjoyment of the premises as well.

We have addressed this issue by agreeing to: elevate the existing exhaust stack;
add brick to its construction; and install a stronger fan to ensure that the exhaust is taken up and away so as not to disturb patrons, tenants and passers-by. Furthermore, the bricking of the facade of the stack will not only improve functionality, but also appearance.

As an existing legal non-conforming use (this building was built around
1901) parking is not required by code. However, we will provide a full Valet Parking Service for patrons of the establishment.

The property at 1916-24 West Chicago Avenue, has two separate zoning designations on a single parcel of land. For example, the majority of the subject property (the front two-thirds of the parcel) is currently zoned B3-2. However, the rear third of that same parcel is zoned RT-4.

It has recently come to our attention that the subject parcel, along with five other parcels with frontage on Chicago Avenue from 1900 through 1924 W. Chicago Ave. (from Wolcott to Winchester), have been incorrectly rezoned.

According to the City of Chicago, these parcels were rezoned in error, because a single parcel of land has more than one zoning designation on the same lot. Instead of changing the zoning designation along the alley line, as was done on either side of this block, the change in zoning from B3-2 to RT-4 occurs on the rear third of all the lots. We are requesting this zoning change to correct this error so that the property at 1916-24 W. Chicago Ave. has one complete zoning designation instead of two.

We are grateful to have the opportunity to address any remaining questions or concerns and look forward to seeing you at the May 4 meeting.
Business Planning Roots/Bleeding Heart