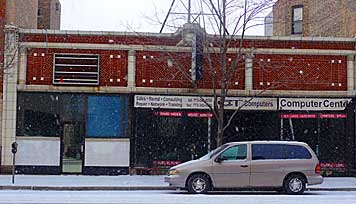 A tour of the CD One Price Cleaners facility on 2955 N. Ashland was arranged March 14 by Ald. Manny Flores. (1st Ward). The location is described to be similar to the proposed location that owner Mike Coreao wants to open at 1916 W. Chicago Ave., at Winchester.

During this tour, there were opportunities to see the plant and discuss concerns with both the alderman and owner. When Coreao spoke at an East Village Association meeting in January, attendees at the meeting expressed a number of concerns, especially regarding traffic and environmental issues.

Regarding traffic (including the adjacent alley), Coreao did mention that traffic would increase, but mostly from customers since locations only average one delivery per week. Because the delivery trucks are typically about the size of a UPS truck, there should be minimal issues getting them into the alley for delivery. At the Ashland location, the delivery trucks just unload in the street. Coreao did mention that he is concerned about parking, but that three existing locations (including the one on Ashland) have basically no parking and everything works out, from his business’ perspective.

At the EVA meeting, some members got the impression that he wanted to market CD One Price as a “green cleaner,” which they clearly are not (according to Flores, who demonstrated having done a lot of research before the tour). Coreao did say that the facility is not truly “green” like Greener Cleaner on Damen, but that they use a hydrocarbon solvent that is not as bad as some other chemicals.

He also said they use better machines that use only 10% the solvent that standard machines use, and each one uses 9 liters of solvent versus the standard 5 gallons. (Note that 9 liters is actually 20% of 5 gallons, not 10%.). They also recycle hangers but not plastic bags (something about which Flores was concerned).

When asked if he planned to advertise or mention in any way that CD One Price is a green cleaner, Coreao hesitated before he responded no, they are “greener but not green.” This distinction was made only when the point was pressed, and contrary information is stated on the company’s website: "the latest high tech, environmentally friendly cleaning equipment.”

Flores was also very concerned with the solvent used in the cleaning process, which is delivered in the weekly schedule every 3 or 4 weeks. When there are spills, the cleaned up mess is kept sealed on site until a hazardous-materials pick-up is scheduled. Spills and related issues are strictly regulated by OSHA, and there are very large fines to pay, so it is unlikely that any sane company would willingly violate these regulations. It is important to note that we would be adding a business that uses hazardous material, something that is clearly not environmentally friendly.

When asked about complaints by neighbors of the Ashland location regarding the smokestacks, etc. Mike said that steam from the press vent did go into the house next door, but they addressed it by redirecting the pipe so it stopped. He said they have not received smell complaints. This information was not verified by visiting the neighbors or nearby businesses.

Flores was asked why he scheduled the facility tour after it seemed apparent that EVA was not interested in this cleaner moving to the neighborhood. Flores said he had not met with EVA. Flores held a hearing for residents of the 800 block on Winchester but he wanted to see for himself if the zoning should be changed.

One cause of great unease is that according to Coreao, the average CD One Price Cleaner location does $1 million in business each year. In looking at our neighborhood, and the cleaners we already have, I am concerned that having One Price Cleaners set up shop on Chicago Avenue would be just like Wal-Mart moving into a small town, and that it would undersell the existing dry cleaners and drive them under.

The company’s website supports that concern, stating that “while the small, neighborhood dry cleaner … would like to compete with us on price they typically can’t do it.” If small cleaners cannot compete with the pricing, one wonders how small cleaners could keep customers.

Our neighborhood is not densely populated and dominated by high-rises the way that Lincoln Park is, so I do not know that we can support a megalith dry cleaner like they can. Personally, I am much more concerned about CD One Price’s effect on local businesses than I am other aspects of their potential move (like traffic and environmental issues). While all of us want to save money in a tough economy, should we be willing to sacrifice the livelihoods of our neighbors to do so?
Business Planning Roots/Bleeding Heart Ward Liaison