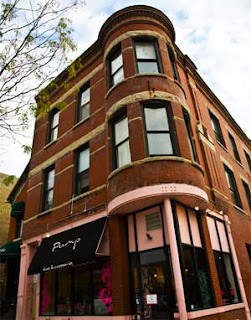 Neighbors met prospective builders of a restaurant and boutique hotel for Division Street at the February meeting of the East Village Association.

A vote was unanimous not to oppose a special use for 1659 W. Division. But even if Ald. Manny Flores slates the project for City Council approval, the principals said it will be 14-16 months before anything happens.

Pump Shoes and Accessories has a long-term lease at the southeast corner of Division and Paulina. Dan Sheehy of Third Coast Contstruction hopes to help relocate the shoe salon and upstairs single-room occupancy tenants.

The city would have to approve the site for the restaurant and 13-room hotel, which likely would have rates near $200 a night. Sheehy is a contractor on "green building" projects and plans to build to LEED certification standards.

"We've seen the neighborhood grow from kind of a sketchy place to a thriving neighborhood," said Terry Alexander, a partner in the Division Street venture who operated the former Soul Kitchen and current Francesca's Forno restaurants. With him was Donnie Madia, who worked with Alexander on the Randolph Street restaurant Avec. He declined after the meeting to give details on the first-floor restaurant concept.

More on Polish Triangle renovations came from planning chair Scott Rappe, who is on the steering committee for what he called a "brainstorming" effort.

The Wicker Park & Bucktown Special Service Area, which funds sidewalk improvements in the business district, plans to solicit ideas from a kiosk or perhaps even a storefront. Everything's on the table, even closing streets or adding CTA entrances underground.

Residents will be encouraged to "throw out ideas" on what to do at the Division-Ashland-Milwaukee intersection before organizations involved with the area work out details — not just financing but points as basic as who owns the land on around the Nelson Algren Fountain.
Business Holiday Jones Meetings Planning Stephen Rynkiewicz