Another round for Chicago-Winchester neighbors 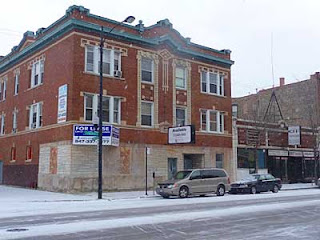 The two buildings at 1916-24 W. Chicago continue to be topics of community discussion. The properties would have been razed for condominiums in an unsuccessful 2007 proposal.

Both addresses came up in a meeting that Ald. Manny Flores (1st Ward) called Feb. 26 to get neighbor feedback on the 1916 property. Flores said he had not yet made a decision.

CD One Price Cleaners and landlord Kenneth Lebovic both have asked the East Village Association to revisit its recommendation that Flores not allow a dry-cleaning plant there despite the prevailing storefront zoning. Board members feel the issue was thoroughly aired before the January membership vote.

The alderman's meeting discussed parking and environmental concerns with about a dozen neighbors. The newer chemical One Price uses is a neurotoxin and skin and eye irritant, but less toxic than traditional solvents and handled in cartridges for safety. Flores rejected claims that this was a "green" process, but said the Environmental Protection Agency and city fire Department had no issues with the plant.

Flores also discussed The Winchester Bar next door. The original request involved a zoning change, an incidental liquor license, an amusement license and the right for a rooftop deck. Flores said he would not support a rooftop idea or anything with Bar or Tavern in the name.

Neighbors voiced concerns about prospects of DJ entertainment and the overall size of the establishment, which would compete for scarce parking even with a valet on site.
Business Roots/Bleeding Heart Stephen Rynkiewicz Ward Liaison